Mountaineer of the Month: Louis Kravits 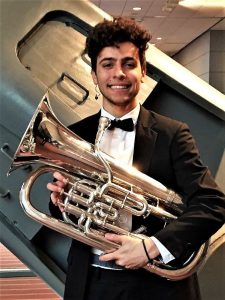 Mr. Kelly selected senior Louis Kravits for this month’s Mountaineer of the Month. Kravits was selected by Kelly due to an incredible opportunity for the young musician. As Kelly notes, Kravits “was selected to perform with the All-Eastern Band” which is a band created by the National Association for Music Education. This isn’t the first major band that Kravits has performed with as he has performed with other state and national bands in the past. Kravitz performed with the All-Eastern Band at a concert in Pittsburgh on April 12th. Congrats Louis!