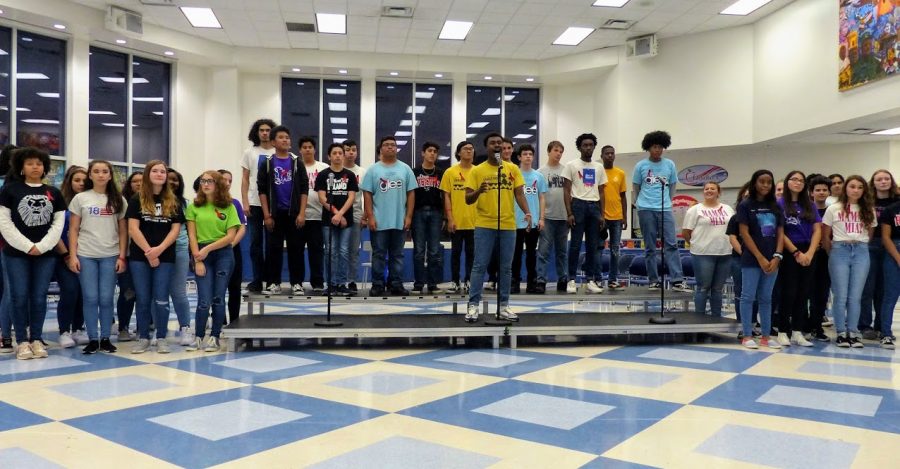 For three years, Broadway Night has been the Glee Choir’s main attraction, featuring group pieces as well as featured soloists, duets, and groups. As Treasurer of the Choir, and Broadway Night veteran, it’s been nothing short of a blast seeing everyone sing their hearts out and make the audience dance in their seats. Our repertoire this year, which was held on October 16, consisted of classic and modern showtunes, even some that have never been featured in a Broadway show.

The group started off the evening with a medley of Jackson 5 songs from Motown: The Musical. Then, Glee Choir President, Steve BrizuelaFernandez and I shared different ideologies of life as Jesus and Judas when we sang “All for the Best” from Godspell. After that, Glee Choir Secretary, Abigail Insana told us “What It Means to Be a Friend” when she sang the song from 13: The Musical. Seniors Isaiah Adrien and Gabrielle Lecour enchanted the audience with love when they sang “We Kiss in the Shadows” from The King and I. Two songs never sang in Broadway show before, but are considered contemporary classics: “Taylor the Latte Boy” and “Taylor’s Rebuttal,” were performed by a group of Treble Choir girls with soloists Elena Hause and Aden Lugo. Another group of girls (Nichole Drane, Alexa DeRonde, Valentina Pappano,

Alicia Keenan-Jones and Nyobi Boddie) performed the first draft of “Burn” from Lin-Maunel Miranda’s Hamilton. Seniors Khalil Louigene and Julian Adams sang a beautiful classic about love, “Lily’s Eyes” from The Secret Garden. Then the full group came back with another acapella piece from Hamilton: “History Has Its Eyes on You.” Then a group of freshmen boys (James Tibang, Lance Zeligson and Giancarlo Minervo) bet on horses in the opening song from Guys and Dolls: “Fugue for Tinhorns.” Freshmen Riley Hahn and Madison Gough sang as Louisa and June from Gypsy (“If Mama Were Married”). For the last solo of Act 1, Isabella Saade sang a beautiful rendition of “Holding to the Ground” from Falsettos. To close Act 1, the full group performed “Finale B” from Rent.

After everyone got dessert, we began with a medley of Queen songs from We Will Rock You: The Musical. Then, juniors Jordan Scott-Young and Veena Stephen sang a powerful ballad from Rent (“Take Me or Leave Me). An unexpected reunion occurred when Isabella Saade, Julian Adams, Khalil Louigene and Joseph Florendo sang “The Book Report” from You’re A Good Man, Charlie Brown, a song that the group previously sang three years ago when they performed the musical at Liberty Middle School. Senior Onye Bosco and juniors Stacey Lozin and Jayla Vyent beautifully riffed all the way to the bank when they sang “Dreamgirls” from the musical of the same name. Seniors Joe Nalieth and Aidan Tarantino sang You’re Nothing Without Me” from City of Angels as best frenemies who don’t realize that they need each other. Mr. Hellyer and Ms. Grof-Tisza gave us a blend of two popular songs made famous by Judy Garland and Barbara Streissand: “Get Happy/Happy Days Are Here Again.” The audience pitied  junior Joseph Florendo as he sang about how his best friend leaving him (“Michael in the Bathroom” from Be More Chill). The last duet of the night went to sophomore Maria Nalieth and junior Olivia Ridley. The duo made the audience tear up when they sang “What About Love” from The Color Purple. The last, extremely funky song of the evening was when the entire group sang “Let The Sunshine In” from Hair, with soloists Sebastian Chaviano, Delia Kravitz, and Gabrielle Lecour. Near the end of the song, the group ran into the audience and boogied with them while Jordan Scott-Young riffed her heart out.

We managed to make over $1,300 this year! A large portion of the money will be donated to Broadway Cares/Equity Fights AIDS. Thank you to everyone who came and congratulations to everyone who participated this year!