What The Decade Taught Us about Global Warming 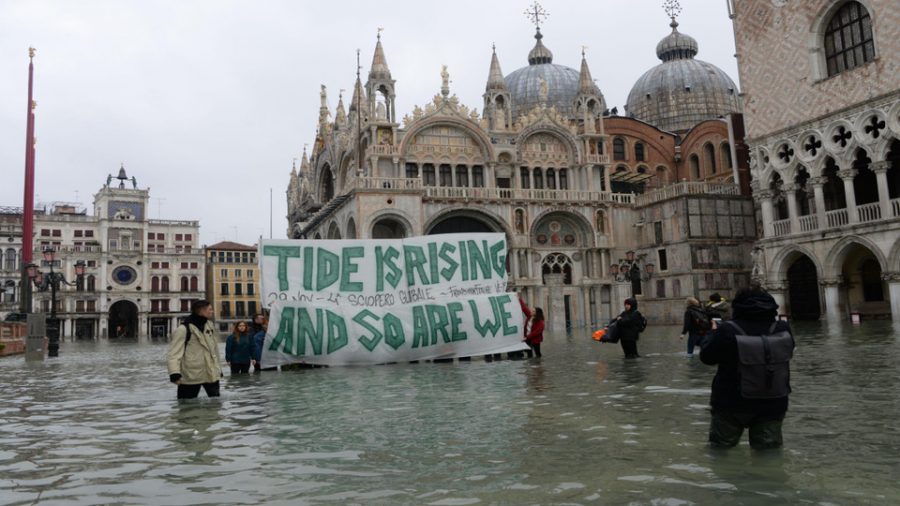 Australia is on fire. Flames are soaring 250 ft into the air killing thousands of Koala bears and Kangaroos. Since 1950, temperatures in Australia have increased by 2.7 degrees.

The 2010s era gave us natural disasters that raised our concern for global warming. With it’s destruction and turmoil, these natural disasters are a sign that our environment is in danger and we have to do everything we can to conserve it. But not everyone is convinced yet.

Only about ⅔ of Americans believe that climate change is caused by humans according to the University of Pennsylvania’s Annenberg Public Policy Center.

Here are the top 4 natural disasters from the last decade that shook our world to the core and awakened our concern for global warming.
Hurricane Sandy 2012
Gas stations filled up with lines of cars desperately waiting to fill their tanks. Grocery stores packed with customers hoarding their carts with food. Snow quickly piled up onto the cold window sills of homes. Gusty winds, icy roads and rain showers occur as powerlines dangle from the street. Outside is pure chaos. And Halloween? Yeah, that was cancelled too.

It’s been seven years since the disastrous Superstorm Sandy wreaked havoc throughout New Jersey from October 22 to November 2 in 2012. The storm, which had a major impact in Jersey and New York, still holds as a striking reminder of the dangers of climate change.

For many of us, Hurricane Sandy was the first observation of how dangerous climate change can be.

Clearly the gusty winds, horrible rain storms and abnormal snowfall of October was far from normal. 7 years later, natural disasters have continued to occur and its lasting impact has been far more disastrous than a trivial (though it was then devastating) cancellation of Halloween.
Haiti Earthquake 2010
The world entered 2010 with a shock as Haiti suffered from a 7.0 magnitude earthquake that destroyed the country. The whole world watched as history was in the making. CNN reported the disaster as it showed horrifying images of collapsed buildings, children ridden in rubble and families without water or any bare necessities.

Villages with cardboard box homes became a common sight as Haiti quickly dove into an era of economic and social turmoil following the earthquake.

The country still faces the economic effects of this disaster as they still have yet to fully recover from it. It’s been 10 long years since the Earthquake and while some progress has been made, homelessness in Haiti remains a pressing issue as people reap the impact of a disaster that took simply 35 seconds.

All eyes were on Haiti as was the world’s sympathy and good prayers, but now attention has wavered and it seems everyone has moved on — the people of Haiti have not.

“The hope for a new day in Haiti was something people really believed in and really engaged in,” said Luis Alberto Moreno, the president of the Inter-American Development Bank, which pledged $2 billion in aid at the International Donors Conference at the United Nations in New York in late March 2010.

“Unfortunately what I find today is that the energy of the donor community [compared with] right after the earthquake and today, has truly changed.”
Floods in Venice 2019
Venice, a popular tourist spot in Italy, experienced severe flooding in 2019 with authorities reporting that the sea level rose up to six feet and washed over 85% of the city.

The Telegraph reports that the floods have cost the town about $1 million dollars to repair all damages.

Common tourist sites such as Doggs Palace and St Marks Square were seen flooded with water as tourists sludged through the water with rain boots and raincoats on.

Just months ago in the heat of it’s tourist attraction times, Venice was in great condition as tourists had the opportunity to enjoy all of the town’s greatest places without the burden of flooding.

The dangers of climate change are quickly catching up to us, it’s simply a matter of whether or not we are prepared to tackle it.
Tsunami in Japan 2011
In 2011, a 9.0 magnitude earthquake shook through southeastern Japan causing a destructive tsunami in 14 minutes.

According to Japan’s Reconstruction Agency, 150,000 evacuees lost their homes and 50,000 of them were still living in temporary housing.

The country is said to have paid almost 200 million dollars to pay for the damage that the tsunami caused. The quake, which had simply a 1 minute warning to Japanese residents, killed over 15,894 people.

Shortly following the disaster, many scientists flocked to Japan to investigate the cause of the earthquake.

“The tsunami itself died out a long time ago, but the effects in Japan will be there for decades,” Titov told Live Science.
What Did We Learn?
According to authorities, what was once known as a weather pattern of floods occurring every century, in just 30 years we are expected to experience abnormal flooding every year. Climate change is already beginning to change our every day weather and sometimes it’s effects or subtle, other times there is no choice but to point it out.

Having a 60 degree weather day in January, when temperatures are expected to drop to as low as 40 degrees, is concerning. A country known for it’s Koalas suddenly losing about 25,000 of them over the course of a month is concerning.

We can’t pretend that global warming isn’t an issue that needs to be dealt with, because sooner or later these effects will be irreversible and we won’t have any power to stop it.