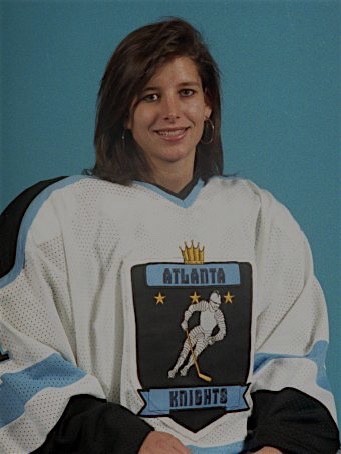 Photo Credits to the Atlanta Knights

Historically, women have been fighting for their place in sports for centuries. This fight has led to shaping many other inspiring female athletes such as Wilma Rudolph, Billie King, Nadia Comaneci and more. Despite this, women playing in major sporting leagues was still often overlooked. It was not until September 23rd 1992 when professional hockey athlete, Manon Rheaume did the seemingly impossible, and broke the sporting barrier. Manon Rheaume not only became the first woman to play in professional hockey league (NHL), but she also became the first woman to ever play in a top flight North American major league.

Manon Rheaume was born on February 24th, 1972 in Beauport, Quebec City, Canada. Her involvement in playing hockey started at a very young age. Her father was a hockey coach, and her brothers also played hockey. Her father also owned a hockey rink, so Rheaume started skating at a very young age. This got her used to playing on ice. By the time she was five, she began practicing and playing hockey with her siblings. At that young age, she played her first hockey game as the goalie. It’s almost like she was destined for greatness.

The 4 major North American leagues are NFL, MLB, NBA and NHL. During that time, there wasn’t a single woman who played in any of these major leagues until Manon Rheaume came along. In 1992, she went for the goalie position in the NHL with the men’s league. She was the first woman to try out and she ended up making history in her exhibition game. Despite speaking very little ENglish, and feeling immense pressure, she prevailed and succeeded as a Tampa Bay Lighting player in her debut versus the St Louis Blues. She went on to play 24 games for them for the rest of the 92/93 season.

Rheaume’s career post-debut was successful. She won a gold at the world championships of 1992 and 1994 with her women’s national team. She also won gold at Pacific Rim Three Nations Cup. Rheaume’s legacy will be remembered. This feat was a step in the right direction, as she left an impact inspiring many other women to follow in her footsteps.