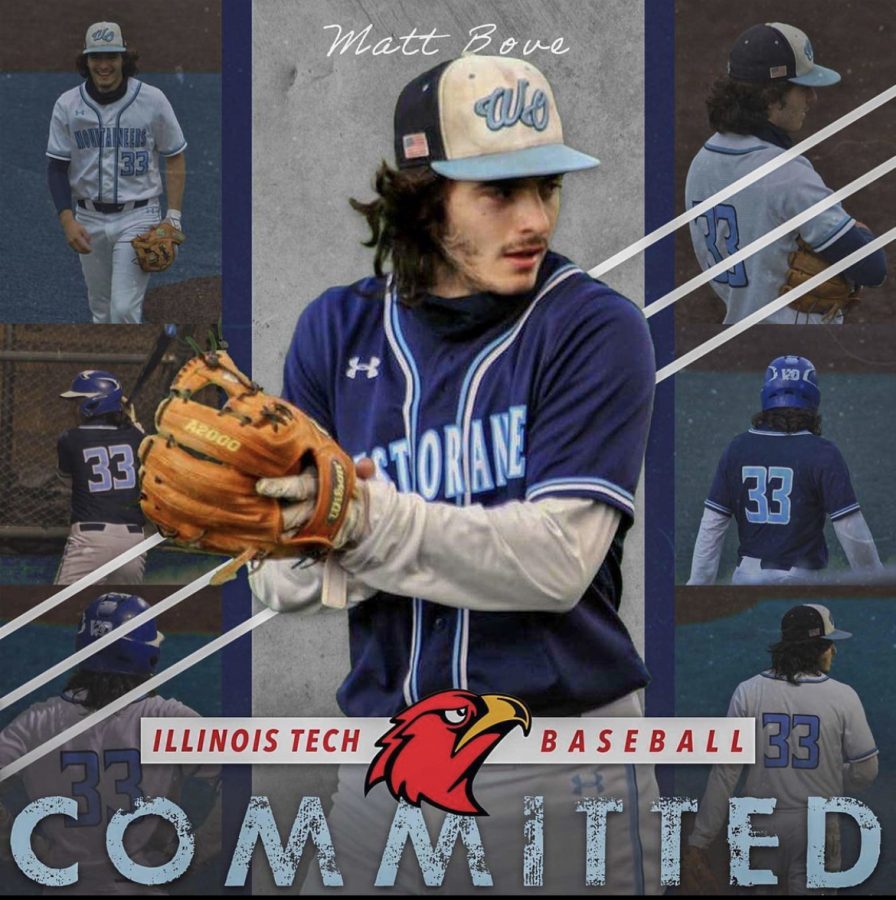 West Orange Mountaineers senior star Matthew Bove has committed to play collegiate baseball at the Illinois Institute of Technology. Coming off of a promising junior year- where he hit for a .232 average, batted in 10 RBIs, and pitched 167 innings allowing only five earned runs- the future Scarlett Hawk is looking to build off of his previous success this spring. The Pioneer sat down with Bove to discuss his athletic and academic future.

What made you choose Illinois tech?

The first thing that made me choose Illinois tech was I got a thing in the mail saying something about their amazing architecture program and I automatically knew I wanted to be an architect, that I wanted to pursue architecture. So I automatically put that on my list of schools, saw they had a competitive D3 baseball program and I was like, I might as well shoot the coach an email. So as soon as I shoot him an email, they respond back automatically and they show interest in me. I get the coach’s phone number- his name is Coach Zeifert- and we just start talking back and forth. And after the visit I loved the campus, perfect size, it will be cold but I’ll live with it. And a great architecture program. I met some of the baseball players, great team.

That’s kind of an unusual recruiting process where you reached out to them, rather than them reaching out to you. Can you walk us through that?

Yeah, for baseball that’s usually how it goes. Which is different than every other sport. Because with every sport, like with football, they see you during a game, they go up and talk to you. With baseball, it’s more like you get a bunch of film and then you have to email them yourself and send them that film. At one point I started emailing like 50-60 schools, and then I would narrow that list down as I go.

How did you feel when you committed to your final choice?

It was fantastic. So, that was actually my second offer, but it felt fantastic because I actually didn’t think I would get any scholarship money at all. But then once I did figure out that they could find some scholarship money for me and they have an open spot on their roster for me, it was the best feeling alive.

How did COVID affect your recruitment process?

Yeah, very much. Because a lot of coaches weren’t able to travel out to see our baseball games because all the planes were shut down, especially from big cities like Chicago, so they weren’t able to come see any of my games. They were basically just going straight off of video, not anything in person. It did also affect us because there was a big dead period last summer, where there’s usually not. But it lasted from I want to say May until late July. That whole period we weren’t allowed to talk to any college coaches. We could send them emails, but they were not allowed to respond. So it was just me getting my voice out there, without anybody responding.

Why was it that the coaches weren’t allowed to communicate with anyone?

I don’t know, the NCAA just stated a complete dead period for baseball for some reason. I have no idea why.

Did your sophomore season being cancelled due to Covid affect the process?

Yeah, so that baseball season got cancelled. We still practiced, but not as a school. We just would go to the field- text in the groupchat, “hey let’s go to the field.” But then over summer I joined a club team, so I was able to get a little video, get a little game.

Obviously, living in Chicago is a lot different than living in West Orange. Do you think you’re prepared to live up there full time?

Not really. But I’ll get there. It’s going to be a big change, a very big change, but I’m excited for it. I’m living in a big city, a beautiful architectural city. So I’m very excited to go out there and I’ll grow accustomed to it.

What is your plan for the future?

So, I’m not really trying to pursue baseball like major league type stuff. It’d be great if I could, but realistically the amount of people that actually make it- I’m not even going to attempt. That’s especially why I chose this school over another school, because other schools didn’t have architecture programs. I want to be able to get a good degree, get my masters and then automatically be able to get into a good job, hopefully- maybe even get into a good internship at Illinois Tech.

What do you think you bring to Illinois Tech?

Do you have any advice for other high school athletes?

Be persistent. A lot of people don’t understand if you just email a couple coaches here and there and then they don’t answer, and then oh, I’m done, I’m not going to keep emailing. That’s not what happens- you need to be persistent. I emailed this coach as well as plenty of other coaches for weeks straight. I want to say at least 20 emails week after week. And people would respond here and there, and they would respond one week and then not respond another week. It’s very back and forth, and up and down, like a roller coaster, but you need to stay on that. If you fall off that pursuit, they’re automatically going to lose interest in you. The more that you keep your name in their inbox, the more that they’re going to see you. The more that they’re going to think of you when they think of baseball.