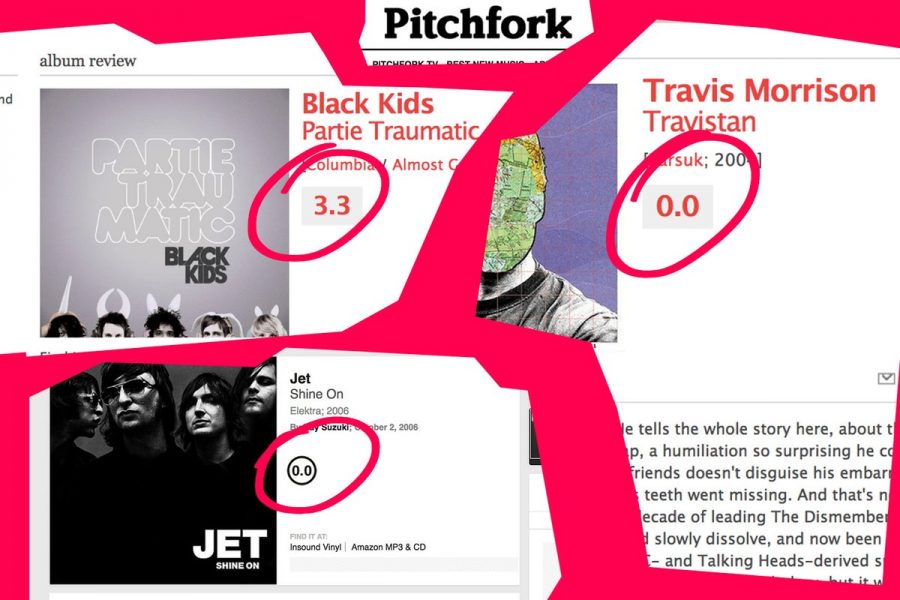 Illustration via Slate. Images via Pitchfork.

Pitchfork, arguably the most controversial music media outlet, is a music publication site that covers music-related media like albums, EPs, and mixtape reviews to music news. They are self-proclaimed as “The Most Trusted Voice in Music.”

Launched in 1996, Pitchfork has reviewed over 28,000 albums and has only given 126 albums a 10. Pitchfork rarely gives out 10s, but when they do, the album usually ends up being on top of every album of the year list in almost every music outlet. Pitchfork reviews have continuously proved to have a strong influence on the public. A couple of examples of 10s from the last few years, as defined in their terms, have been Fiona Apple’s Fetch the Bolts Cutters (2020), D’Angelo’s Voodoo (2000), and one of my personal favorites, Kanye West’s My Beautiful Dark Twisted Fantasy (2010).

Critics aren’t everything, especially when it comes to something as subjective as music. Still, it’s hard to deny that critics don’t play a role in how artists will be remembered throughout music history. Critically acclaimed albums help cement artists into music history forever. It’s hard to imagine an all-time great artist without at least 1 lauded project, hence why people tend to put these types of rating publications on such a pedestal. While Pitchfork could be viewed as the most popular rating publication site, they also have many issues.

As big as they are, they’re also quite controversial. Their inconsistent ratings get them so much backlash, and rightfully so. There are many classic albums that the Pitchfork ratings fail to reflect their popularity and creativity, originality, etc. An example of this is Kid Cudi’s Man on the Moon: The End of the Day (2009). It’s one of the most influential albums of the last decade, influencing artists like Travis Scott, Isaiah Rashad, Lil Yachty, and more. Day ‘n’ Night, Pursuit of Happiness, Up Up and Away are all songs on this album that are heavily praised by the public, including myself. This album was good enough to inspire a new generation of artists, and it received a shocking score of 4.1. Other albums that have a great reputation from fans, but Pitchfork gave underwhelming scores, include Travis Scott’s Rodeo (2015), Daft Punk’s Discovery (2001), J Cole’s Forest Hill Drive (2014), and Tool’s Lateralus (2001). There are different reviewers for different albums, so inconsistency almost feels inevitable due to music being as subjective as it is.

Another problem with Pitchfork is the time it takes to review a project/album. They have a tendency to review albums too early. The average Pitchfork review comes 2-3 days after the album release. It takes time for songs on an album to fully sink in. Early reviews can age poorly, giving albums unfair scores. Pitchfork rarely changes their reviews, so the score they put down for the album is most likely set forever.

Pitchfork comes off pretentious, and their motto, “The Most Trusted Voice In Music,” certainly doesn’t help their case. People don’t expect the site to be perfect every time, but when the website is presented as “all-knowing,” giving out bad reviews comes with, unsurprisingly, a lot of backlash. Hopefully, in the future, this site can improve their rating system.