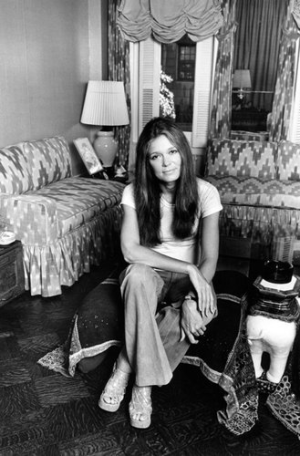 A photo of Steinem taken by Lynn Gilbert in 1977

With her astonishing career as an activist for the Women’s Rights Movement, Gloria Steinem has made a name for herself in the journalism world.

A journalist, feminist, women’s rights activist, Steinem has come a long way to get where she is now. After studying government at Smith College and spending two years researching in India, she learned about grassroots activism which led her to be interested in writing. After college, Steinem began to work as a journalist but found it difficult as she was assigned to research roles despite the men running the newsroom.

Her contributions to the media and press have withstood past her career. Ms. Magazine, an American liberal feminist publication was founded by Steinem and is still active to this day. Afterward, she remained one of the magazine’s editors for fifteen years.  She pushed for the magazine to join and be published by the Feminist Majority Foundation. In 1968, she was a political columnist for the New York Magazine and wrote feature articles about women in power and politics.

One of her most groundbreaking pieces of work centered around her 1963 article, “A Bunny’s Tale,” which she penned during her undercover investigation as a Playboy bunny at the New York Playboy Club. Steinem, who was at the time a freelance writer, was commissioned by SHOW magazine to go undercover at the Playboy club to report on her authentic experiences by applying for a job under a fake identity. Steinem’s espionage stint increased her popularity while dismantling the illusion of Hugh Hefner’s Playboy empire. Through this, she uncovered the misogyny and exploitation of the club. Bunnies were paid less than they were promised and subjected to harassment. In addition, the objectifying uniforms were uncomfortable and could not be properly used. “A Bunny’s Tale” cemented its place as one of the first feminist attacks on Playboy and established Steinem’s credibility as both a journalist and a feminist.

To this day, Steinem continues to work towards her goal of social justice. As she recently said, “The idea of retiring is as foreign to me as the idea of hunting.”